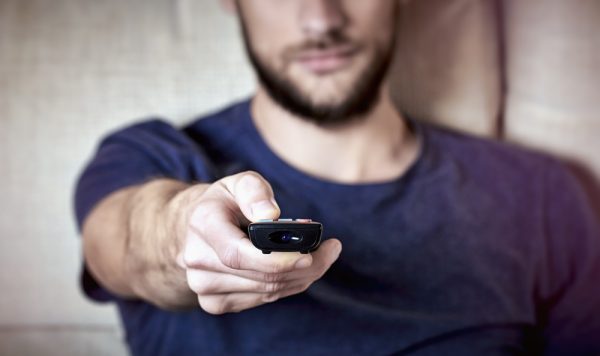 In days gone by ceiling fans were simply controlled by an on/off switch at the wall and/or by a simple pull-chain which also controlled the speed.  That is cheap and cheerful and does the job but times have moved on.  Now apart from the bottom-end cheapest fans most people prefer to use a dedicated remote or wall control.

We stock a wide range of top quality remote controls including universal remote controllers that will work with any fan and not just the ones that we sell.  Most people prefer to use a remote rather than a wall control although we do stock those as well.  We stock controls manufactured by Hunter, Lucci, Matthews, MrKen, Casa and ourselves.  These are all high quality reliable controllers that work with batteries and on either infra-red (IR) which require a line of sight or radio-frequency (RF) usually on 433MHz frequency although the Zephyr fan control is on 3G frequency.  Since other domestic appliances and entertainment systems often use the same RF frequency all our remotes have multiple channels that can be set if needed.  DC remotes automatically by cycling through thousands of alternatives until it finds one that is not being used. 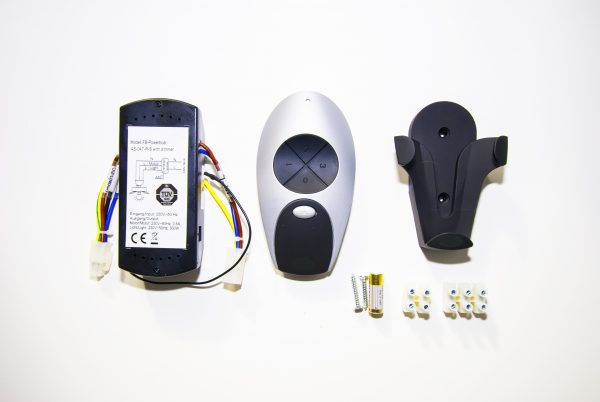 To provide users control of a ceiling fan requires 2 components in the pack to be present: 1) the handset or transmitter and the 2) receiver which sits in the canopy next to the ceiling.  In order to work these must be matched or “paired” with each other.  AC controls are much older than the newer DC ones and typically have dip switches to change the channel – see pic.  If you purchase a replacement handset then the dip switch set on it MUST match the setting on the receiver otherwise it will not work.  For DC fan remotes they are set by pressing the “set” button continuously until 2 beeps are heard.  During this time it automatically cycles through thousands of alternatives until it finds one that is not being used.

It is important to note that the controllers for AC and DC types of ceiling fan are entirely different and cannot be used for each other.  The DC controls typically have 6 speeds since DC voltage is easier to control evenly whereas AC is always 3 speed.  DC controllers are also called drivers since they convert the mains AC voltage that is fed to the ceiling fan first into DC which is then subject to the desired control and then back into AC again to power the fan motor.

Other Components in the Ceiling Fan Control System

AC fans also use a number of capacitors to start and control the speed of the fan so if you have a faulty fan just replacing the remote control pack may not restore it to working order.  Replacement capacitors are sold individually or these days increasingly as an assembly known as the “wire harness”.  If after replacing this your fan still doesn’t work then the only other thing it can be is the motor.  However these are extremely reliable and very rarely blow or pack up.

DC fans’ receivers on the other hand do not have any additional control components and will “drive” the motor directly with the output hence they are also called drivers.  This means that they are more complex, expensive and initially were also very unreliable and especially vulnerable to voltage spikes – see below.   Second generation designs are far more robust and long-lasting. 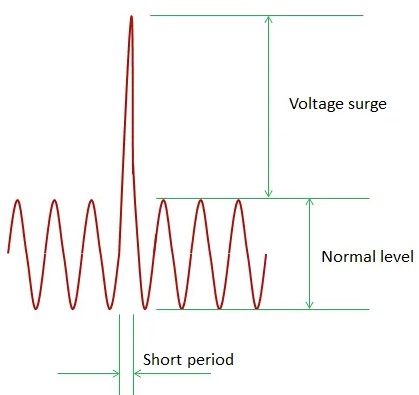 All mains power supplies suffer from power surges and voltage spikes from time-to-time.  These can be exacerbated when lightening is striking sub-stations.  A voltage spike is a sudden increase in voltage that lasts for less than 3 nanoseconds. A sudden increase in voltage that lasts for 3 nanoseconds or more is called a voltage surge. These spikes can be up to hundreds or even thousands of volts and are harmful because they cause the wires in your electronic equipment to overheat, degrade your equipment and lead to premature failure.  They can and do burn out equipment and in the worst cases lead to fires.  Sometimes other equipment turning on and off on the same circuit or nearby in an apartment above or below can create such behaviour.

All our ceiling fan receivers are designed and manufactured in Taiwan to withstand the regular spikes and surges that typically occur.  Taiwan is the World centre for electronic control design and renowned for their quality. Cheap Chinese receivers on the other hand are built to a low price and quality – they are susceptible to damage, do not have over-voltage protection and are not robust and the components often degrade quickly meaning that they don’t last for very long.

Sometimes even the added protection on our remotes is not sufficient and a dedicated power surge protector is required to be fitted to a power supply.  We had one customer whose power supply blew through 3 motors and 4 receivers in the space of a few weeks when normally we would maybe get 1-2/year. A dedicated surge protector costs around £500. 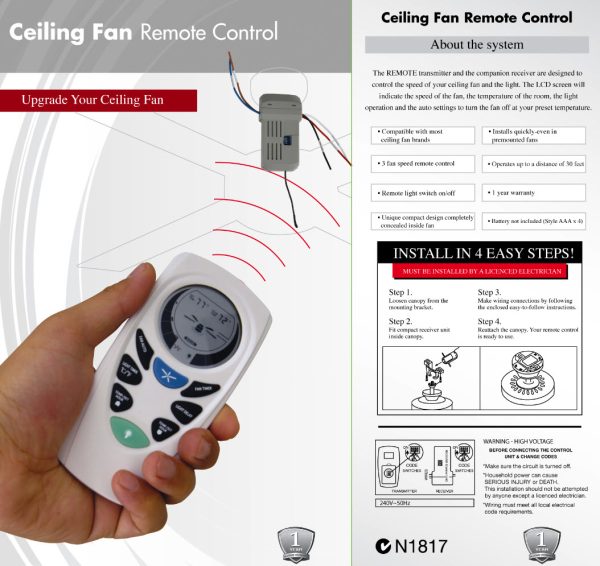 Once you have decided on which ceiling fan to buy the next thing is to decide how you want to control it. Having to stand up and pull a cord every time you want to alter the speed or turn it on or off can be a pain. There are four ways to control a ceiling fan: Use a remote control, a wall control, a pull chain or the main light switch.

1. Main light switch control – Wiring the fan into the live from the wall switch to the room light means that as soon as you turn the light on the fan will come on. This is fine but what about winter when you don’t want the fan on?

2. Pull chain control – Most fans will come with a pull chain that is attached to the fan motor. This will also have the 3-speed control settings that will cycle through as you pull the chain repeatedly.

3. Wall control – This will enable you to separately control the fan speed from the wall and to turn the fan on and off from the wall. In addition you can control any light on the fan so long as you have an additional live wire (termed “switched live”) running to the ceiling fan. This may require a lot of extra work and cost depending on the construction of your walls and the location of the fan.

4. Remote control – Remote controls are easy to install as there are only two components: a receiver which sits inside the canopy wherein lies the hanging kit and the handheld remote control itself. On installation ensure that the small DIP switches on the receiver and controller are set to be the same. The power including the switched live now all pass through the receiver enabling control to be passed to the RF remote. The speed and light can be controlled from the remote. 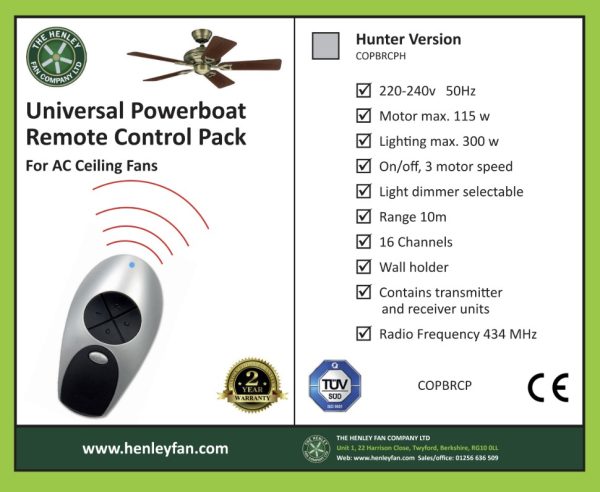 6. Timer control –  To put your fan on a timer use our FNK Advance Control.   It can also give a turn off after so many minutes.   The MrKen Variable speed control is an amazing control that not only does a timer but a sleep function so that the speed is gradually reduced to 50% for a comfortable night’s sleep.  It is infinitely variable and works on AC fans overcoming the usual 3-speed limitation of AC fans.

7. Controlling multiple fans with one control – This is simple to do by setting the DIP switches of all the receivers to be on the same setting or channel as the remote. You thus don’t need to buy multiple remotes only multiple receivers which we sell on their own.  Beware that some other household electronics may use the same frequency so you might find that the fan operates when you turn on your hi-fi system!  This is easily remedied by selecting an alternative channel.

8. DC ceiling fans – These can only ever be controlled by remotes due to the way the voltage works.  The on/off can be on a regular wall switch but the speed and reversing swtiches have to be controlled by a hand held remote.  The term DC ceiling fan is a bit misleading since they are fed with mains 240v power but then the controller converts it into DC voltage using a transformer so that all the benefits of DC controllability are gained before the power is converted back into AC voltage to be fed to the motor.

How to Zone Sets of Ceiling Fans

If you have a larger area with more than one ceiling fan to control eg in a restaurant, then you can either control all of the fans with one remote or split them into zones.  Simple “pair” up all the fans you want with each handset in turn setting either the dip-swtiches to be the same (in the case of AC fans) or cutting the power to all the other fans apart from the set you wish to pair (in the case of DC fans).  Once you have paired a DC handset with a set then the frequency and pair will be memorised so when you move on to the other zones and later return your paring will not be lost.  For this reason it is best to have a mains power master switch to each zone to facilitate the initial pairing and any repeat pairing that might be needed at a later date.

If you have a light on your ceiling fan then you should get a control that will also turn the light on and off.  To do this requires an extra wire from the receiver (normally white) to go to the wire harness of the fan itself but normal standard 3-core wiring (live, neutral and earth) is only needed to the receiver.  If you are using a wall control then control of the light is only possible if you install an extra wire from the wall switch to the ceiling mounting point of the fan.  You can obviously use 4-core wire to do this as well.  The extra wire is needed to take the light signal to the fan.

Full instructions for installing your receiver can be found on the relevant product pages should you mislay them.  Also make sure you don’t use the original lighting pull cord at the same time as using the remote control as this could damage the receiver when pulled or can set the fan out of kilter limiting its speed. We normally recommend cutting the pull-chain short so that it is only ever used for resetting the fan control or if the remote is not working for any reason.