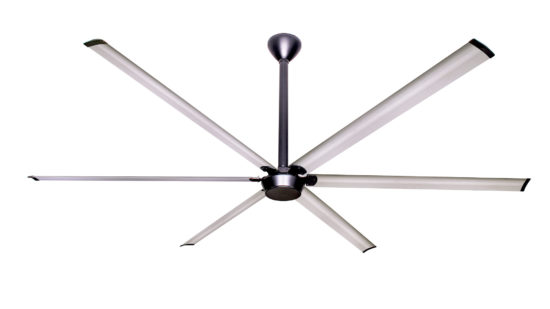 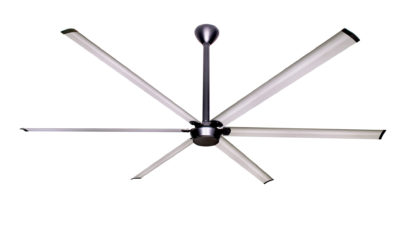 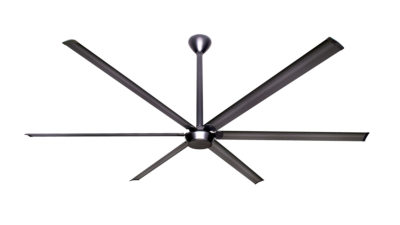 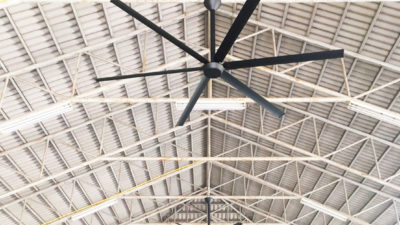 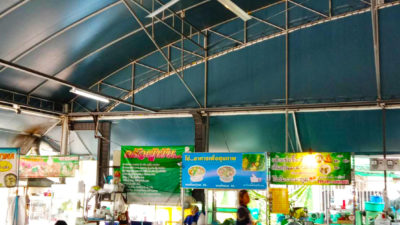 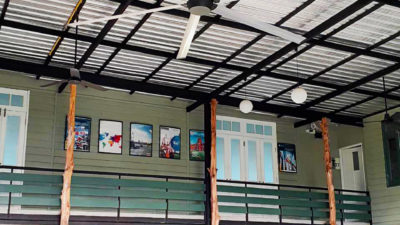 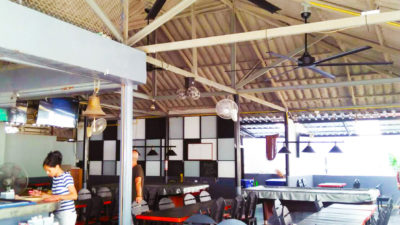 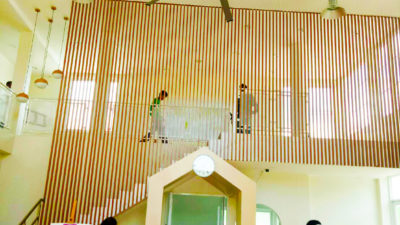 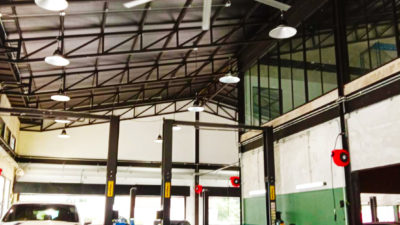 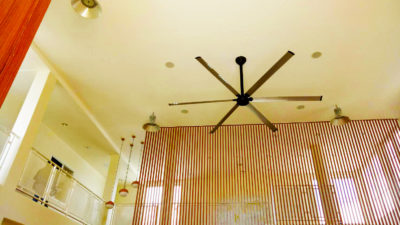 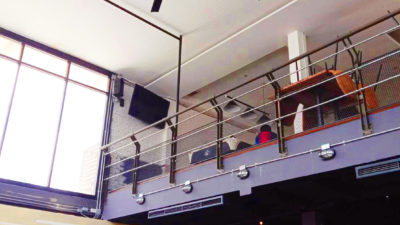 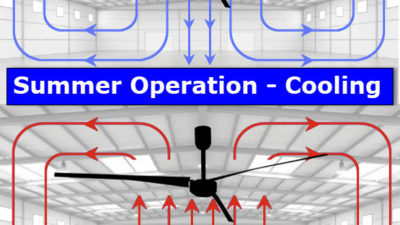 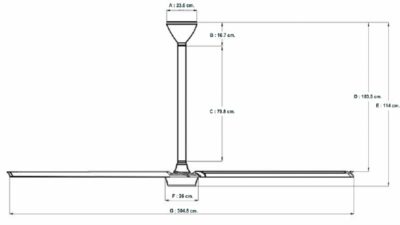 Get a huge airflow with huge cost savings!  The unbeatable value MrKen Cosmo is a new design HVLS low-energy ceiling fan with a BLDC motor and 6 speed control for large rooms with high ceilings.  It delivers a huge 92,000m3/h air flow in a quiet very efficient way.  It is light-weight and easy to install not needing special equipment.

The Cosmo HVLS not only provides the most efficient cooling possible in the summer but gives up to 45% heat savings in the winter by operating in reverse.  Limited stock available! 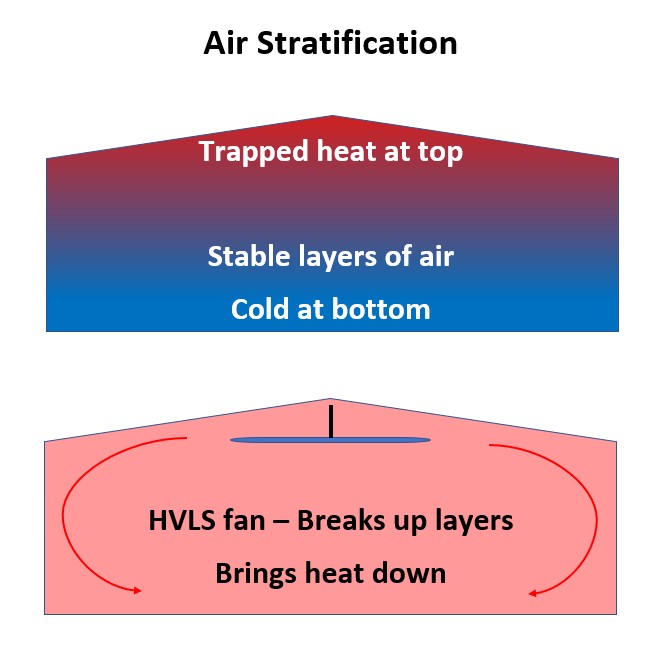 Whilst HLVS high volume low speed ceiling fans have been around for 10 years the low-energy brushless DC (BLDC) versions of them are relatively recent innovations.  These bring all the benefits of moving a huge amount of air for a very low energy use but with the additional benefits that they are easy to install and considerably cheaper to operate, giving even quicker paybacks that can be measured in months.

The MrKen Cosmo HVLS industrial fan was launched in Thailand in July 2019 and has an amazing airflow of 92,000 m3/h – that is equivalent to 10 regular ceiling fans! It has already proved a big hit there due to its high-performance, light-weight, low-energy consumption, ease-of-installation and most important of all it is great value.  It’s low purchase price is less than half of the competition which coupled with it’s lower installation and running costs make it an unbeatable choice.

The MrKen Cosmo HVLS ceiling fan has the following features and benefits:

What is an HVLS High Volume Low Speed Ceiling Fan?

HVLS High volume low speed ceiling fans are eco industrial fans that have narrow helicopter-type blades that range from 2.5m to 8m and which rotate slowly at 40-90 rpm to cool down and save energy for large buildings.  They are very quiet due to their low rotational speed when compared to the propeller type of blowers fans.  They move vast quantities of air 80,000 m3/h up to 500,000 m3/h for an incredibly low energy consumption that can be as low as 500 m3/h/w.  They offer two big benefits that directly translate into bottom-line financial, energy and carbon savings all the year round: 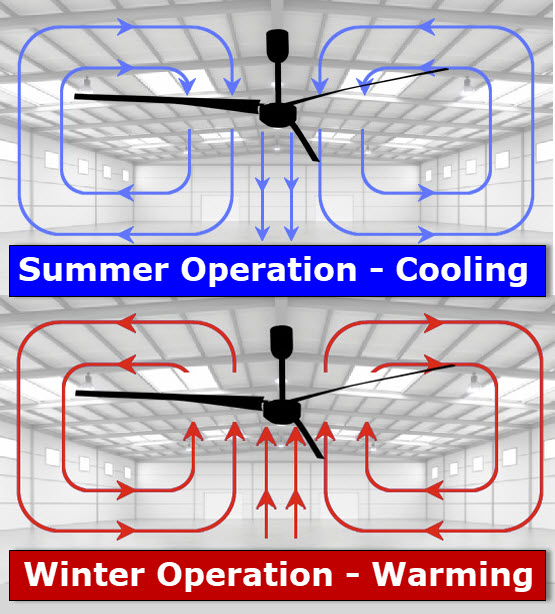 In the summer months HVLS fans provide effective cooling by a combination of:

The alternatives to HVLS fans – Traditional air conditioning systems are extremely inefficient, consume large amounts of energy and are very expensive to operate in large open spaces. Regular sized ceiling fans create hardly any cooling effect in large facilities with high ceilings – and it is sad to see these used in public spaces like airports since all that they do is waste energy. Floor fans are very noisy, present a safety hazard, and occupy valuable floor space.  Desk fans will provide only a very small airflow to a specific area such as a desk.

In the winter months in temperate countries like the UK space heaters are used to provide a comfortable working environment.  However since hot air always rises it is usually not where it is needed.  It rises and gets trapped at the top of the room and not down at the floor level where the workers are. Often the heater is also at roof level meaning that the heat doesn’t even make it down to floor level other than by slow ineffective convection.

The hot air also forms into semi-stable stratified layers of different temperatures from the ceiling downwards.  This leads to not only higher heat losses (as heat loss is proportional to the temperature difference with the outside) but cooler temperatures for staff at the floor level.   An HVLS industrial fan will immediately break up these layers and move the hot air from the top down to the floor level.  Thus the heating is being used effectively and not wasted.  Such a simple thing can save up to 45% on energy heating costs.  The fans can often pay for themselves – in under 6 months.

How do HVLS Industrial Fans Work?

The principle behind the high volume low speed fan is to move very large volumes of air by the use of large diameter fan blades moving at a slow rotational speed to break up the stratified air layers. The slow rotational speed of the fan makes it far more efficient at converting the electrical energy into useful laminar airflow instead of the wasteful turbulent airflow and drag that occurs at higher speeds – which ends up simply generating unwanted heat.  These large blades move so much more air than their smaller high speed compatriot ceiling fans, typically 5-20 times as much, with an equivalent cooling effect.  No other cooling system is as energy efficient as one using HVLS industrial fans. In fact, studies have shown that businesses can lower or even eliminate the use of expensive air conditioning systems altogether with an optimized HVLS ceiling fan solution. Some HVLS vendors offer 3D thermodynamic modelling of their customers’ rooms which prove the efficacy of HVLS fans as highly cost-effective air cooling systems.  This is a bit of a gimmick since if the simple design rules are followed then coverage will be effective. 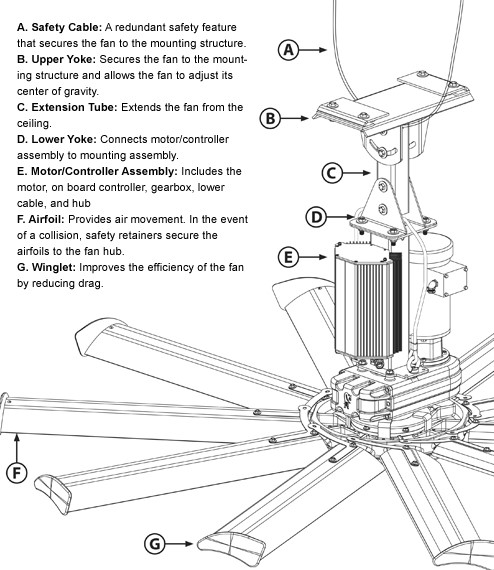 Just as with smaller ceiling fans so can HVLS fan models be split into the AC and DC categories.  The same benefits of DC DC vs AC ceiling fans apply – a much lower energy consumption typically 150w and 70% less energy like-for-like, better controllability with 6-speed settings and most important a far lower cost of installation.  This is because they have far more efficient motors which are smaller, lighter and easier to lift in place using just a ladder – no need to rent an expensive cherry picker!  Also they have no special high tension guide wires, no expensive 3-phase voltage or high powered wiring making them much simpler and quicker to install.  DC motors are also direct drive and brushless meaning that no large heavy expensive gearbox is needed, no stepped power supply for startup, no overheating issues etc. The diagram to the right depicts a typical AC HVLS industrial fan construction with a large inefficient motor and heavy gearbox.

The range of applications for HVLS industrial ceiling fans is extensive with almost any large room, hall or building a candidate for substantial operational energy savings.  Putting conventional ceiling fans in these rooms is simply a waste of time and money since the volumes of air that need to be moved and the ceiling height are so big that they make no impact whatsoever at the ground level.  The lack of knowledge about this can be seen in many retail “sheds” who have wasted money on “cheap” ceiling fans that do nothing but waste energy!

Typical applications where HVLS fans have been successfully deployed include:

Hunter entered into the HVLS market 4 years ago. This video explains how air temperature stratification occurs.

Macro Air make some good fans at the large end 5-7m but they are expensive and their power consumption are nowhere as good as the Cosmo at the 3m size.

This explains and illustrates exactly how the cool air is moved around by an HVLS fan in a large building.

The air movement created by an HVLS fan in a large warehouse is shown using smoke.

How Heat Behaves in Industrial Buildings 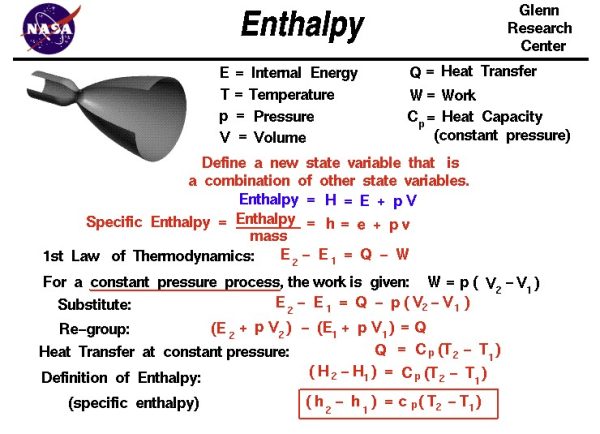 In physical chemistry and thermodynamics heat energy should be viewed somewhat like matter – it has a size, body and content to it.  It is known technically by chemical engineers as enthalpy and when applied to gases can involve some fairly challenging mathematics!  It is important to remember this when considering the best way to cool a space since that heat energy needs to be moved or removed from a room just like you would water from a leaking boat.  If it is not removed then the room will simply get even hotter the following day.    Hard solids such as concrete and brick are like batteries – they store this energy and give it off as heat until it is forced out by a sufficient heat difference with cool air.  This heat difference can be created by either air-conditioned cooler air or by cool air taken from a cooler time of the day such as night time.

Once cooled a solid mass then acts as a heat sink until it is fully warmed up and cannot take any more.  This is why buildings with very thick walls like castles stay cool even in heatwaves due to the huge capacity to soak up heat like a sponge soaking up water.  Running an HVLS ceiling fan overnight with open windows can make a massive difference to the heat stored in the building matter.  The fan will break up the stratified layers and remove the trapped heat from the air stuck at the roof area and will draw in and replace it with cool air.  The HVLS airflow transfers this cool air down to the floor level where it cools the solid floor mass of the building overnight turning it into a massive heat sink or sponge ready for the start of the next hot day.  This is easily and effectively done in an eco-friendly way using a fraction of the energy running costs of an air conditioning system.

Only logged in customers who have purchased this product may leave a review. 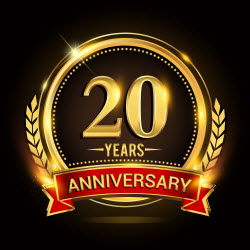