Get A Massive Reduction over Air Conditioning Running Costs

You can slash your cooling energy use and costs by switching to a ceiling fan instead of air conditioning.  The energy consumed by using a ceiling fan is approximately 95% less which is a massive reduction especially with rocketing electricity and energy costs.  For temperate climates air-conditioning is simply not needed most of the year and apart from in a July heatwave when it is then having it is simply overkill.  Since the costs of running it are so high especially in a heat-wave many retail outlets and restaurants that have AC installed don’t use it anyway, the later giving the excuse of not wanting to cool the food down.

Are Ceiling Fans as Effective as Air Conditioning?

In terms of cooling the ceiling fan cools in two ways:

With a ceiling fan you only need to run a lighting duty wire to the fan to install it.  The fan just screws into the ceiling which can be suspended – in which case a special hanger is used – or into a solid wooden cross-member and controlled by a remote.  With AC you have to install the ugly unit on the wall and run the coolant pipes through to the chiller fan that is outside.  You will also need to install ducting if you want to conceal the units.

A combination of ceiling fans with air conditioning can save a lot of energy and money since the air conditioning settings can be set at a higher temperature for the same effect.  The difference is 3-4 degrees centigrade which will be a 30-60% reduction in energy use so the return on investment is compelling.

Traditionally ceiling fans have used AC (alternating current) motors that in a typical ceiling fan that moves 11,000 m3/h would consume 70 watts of power.  Then 6-7 years ago came the DC (direct current) motors that reduced that to 35w.  Then 2 years ago the Taiwanese (who lead the field globally in this technology) developed the ECM (Electronically Commutated Motor) which is also a DC fan but a further significant improvement and whose use has spread to most consumer appliances that use energy hungry motors such as fridges, freezers, air conditioning.  What is an ECM motor comprise of?  It has 3 parts:

The biggest benefit from this improved control of the motor is a more efficient motor with more energy converted into air movement rather than heat.  The power consumption is about half that of a traditional DC motor for a given amount of airflow.  The other great thing about an ECM motor in general is that it maintains a set precise airflow rate regardless of changes in torque.  Things like air temperature and pressure thus won’t affect the airflow rate should they changed. Should a change occur then the RPM of the motor will either ramp up or down to maintain the set airflow rate.  This also gives great controllability to a DC fan and so they usually have 6 speeds compared to the 3 that an AC ceiling fan would have.

Below we present some graphs that show how the energy consumption compares between a low energy DC-motor ceiling fan compared with a traditional AC-motor ceiling fan. The DC ceiling fan has 6 speeds whereas the AC fan has 3 speeds but even in high speed the DC fan only uses 24 watts of electricity, whilst still achieving the same RPM and airflow as the AC fan.

The first graph shows the power consumption of the fan motor only. 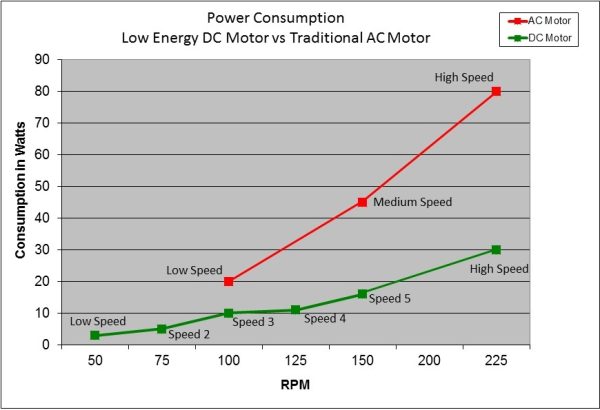 In our shop you can select the fans that are DC low energy.  Here we list them too: