Dyson Air Multiplier Fans – Get the facts before you buy! 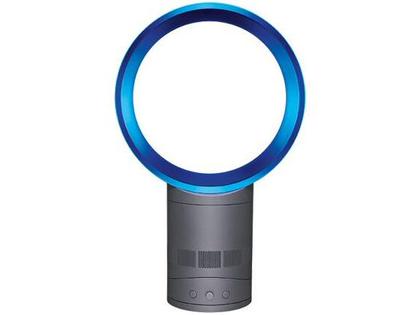 Don’t Buy a Dyson Fan Until You Read This Review

The Dyson Air Multiplier desk fan was launched in October 2009 and closely followed by  pedestal and tower variations in June 2010.  It has sold in the 100,000’s so is it a no-brainer to buy one?  It depends if you want a piece of expensive pretty useless junk cluttering up your desk or not!   As a nice novelty invention, scientific model and demonstration of the Bernoulli principle it is fantastic.  But it seems that far from inventing this curiosity Dyson have copied an older and patented Japanese design by Toshiba – an interesting fact that emerged when Dyson tried to sue low cost Chinese producers of a similar fan!   As something that looks a pretty cool design to amuse the kids for 2 minutes and show off to colleagues then it is great.

It works like an aircraft wing in drawing air in and increasing it’s speed over the curved surface.  But if you want a proper fan that moves a decent volume of air then forget it.   Inside is a very small and noisy fan which pushes air into the equalisation tube where the pressure is equalised and smoothed to cut out any alleged “chopping” effect that traditional fans supposedly give.  It is not a “bladeless fan” as is claimed but a fan than is simply small (too small to be effective) and hidden from view.  In fact the “chopping” action so referred to occurs in a poorly designed fan when the air is flowing not in a smooth efficient laminar manner but in the turbulent regime due to the wrong blade angle and shape.  This is not a safety difference since all desk fans have wire mesh grills over them to prevent injury.  We won’t even go on to mention build quality here but suffice to say it is not made from solid cast metal but much cheaper plastic although the pretty bright colours and sleek novel design do make it look appealing which explains its success given it’s abominal performance.  It sure doesn’t come with a lifetime guarantee that our ceiling fans do and no doubt will be dispatched to the nearest bin once the novelty value of this noisy device drops off since the cooling effect is absolutely minimal.

Now what about performance and noise?  The vital figure of volume of air moved is around 40 cubic feet per minute (CFM) for the 10″ fan which is pretty pathetic compared to the same sized traditional desk fans that move over a thousand CFM.  On high speeds traditional desk fans will make some noise but per CFM of air moved much less than the Dyson.  The Dyson 10″ fan produces 50 decibels which is slightly more than a similar sized desk fan that moves 25 times the volume of air.  A smaller £10 cheap and chearful 6 inch fan that moves 190 CFM ie 5 times as much as Dyson is just 37 decibels which since it is a logarithmic scale is about 1/25 of the noise, so the Dyson is in reality over a hundred times noisier per unit of air moved.  So it multiplies air? Yes like my abacus multiplies numbers true but not very useful. Is it worth paying £250 of my hard earned cash for?  You have got to be joking.  Better to buy a nice piece of art or a gadget that does something far more useful or if you really have money to burn give it to charity.

However for real performance when it comes to moving air in volume and quietly is to use a ceiling fan.  Hunter ceiling fans move 8-12,000 CFM (ie 300 times as much as the Dyson) and are very quiet at around 25-30 db which can be equal to or less than ambient levels so that they are barely noticeable, ie 1/100 of the noise of a Dyson and per CFM of air moved a massive 30,000 times less.  Sorry about that but looking at the facts and construction it is easy to understand.   A ceiling fan has a much larger diameter blade which means it can move a larger volume of air at a much slower speed eg 250 revs per minute on max speed compared to 1-3,000 for a desk fan.  A quality ceiling fan should have no wobbles, or hums or mechanical noise of any sort just a slight noise from the air being stirred on higher speeds.  Hunter should know, it has one of the very few UEL approved top rated sound testing laboratories in the World.  And that alleged chopping of the air?  That is yet more marketing nonsense from Dyson since who can actually feel the difference between a continuous air-stream and a fan running at 1,000 rpm – nobody on God’s earth I would suggest.  Where are the blind tests, the “pepsi challenge” to prove this?  They don’t exist!

So if it is quiet, low energy use decent air movement you want – which is what creates the truly comfortable and naturally cooling environment you would enjoy, then go for a well-built highly efficient quality ceiling fan with a lifetime guarantee.  If it is a noisier point source of air cooling then go for a traditional desk fan. Dyson?  More like dycon or con-air!  Dyson’s vacuum cleaners and hand driers are truly amazing and revolutionary – but this product is definitely not.  If it is a pretty coloured, nice looking, expensive, overpriced, noisy plastic toy you are after then go for the Dyson Air Multiplier.  If the Chinese can knock out similar designs  for around £20 you have a good idea of just how much profit Dyson are making – it should be called the Profit Multiplier!

In summary, this is no more than a piece of junk.  It is a big rip-off sold with lots of strong marketing and lies!  However don’t just take our biased word for it, take a look at some unbiased reviews on Amazon here or Who-does-Dyson-think-theyre-Kidding or if you are still not convinced then go and buy one and compare it to one of our desk fans – the proof will be in the pudding!